How many of you experienced your music sounding much better at nigh time? Like there is a blacker background, you hear a little bit more nuance, a better texture, music breathes a tad better, it is smoother sounding as well.

I experience daily this phenomenon and that’s not because I have a drinking problem but because I am living in a flat where a lot people use at the same time multiple electric consuming devices that induce noise and fluctuations in the AC power lines. That noise is carried from apartment to apartment, it is added and multiplied and sometimes can became a big inconvenience especially if you are using electric sensitive gear, like how for example is all our precious audio equipment.

Since at night time most of those devices are not engaged (Dimmer switches, LED, incandescent or fluorescent light bulbs are really nasty, TVs, vacuum cleaners, air conditioning, kitchen appliances and many others) the AC line becomes cleaner and doesn’t fluctuate as much, as a result the music will also be cleaner, with a blacker background, smoother sounding and more engaging.

If that happens to you as it is to me, it means it is time to invest in a high-quality Balanced Isolation Power Conditioner, instead of a simple power cable that will do nothing to clean all the dirt inside the AC power line.

I am researching for a very long time and plotting of purchasing such a device but at an affordable price. This was a really tough search since majority of them are crazy overpriced, but all things come to those who wait, isn’t it? At the right moment I stumbled upon the KECES BP-600 Balanced Isolation Power Conditioner that has everything I need and it is at the right price.

I have included it in my system for about two weeks and used it with multiple digital sources and analog amplifiers with good results. Even my powered speakers shown considerable improvements being powered by the BP-600.

Before I tell you what it did in few of my audio systems, let’s first delve deeper and understand why it ticks all the boxes and why it should be a no-brainer investment. 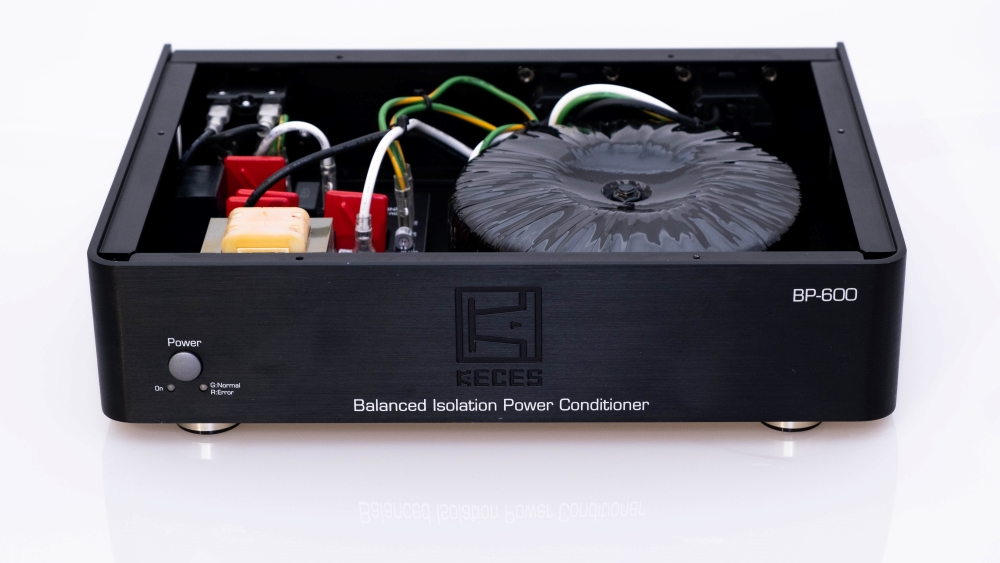 It might look small in pictures, but actually it is a bit bigger than majority of my DACs and headphone amplifiers that I have tested of late. You would be a bit surprised if a box of 300 * 220 * 66 mm would have a whooping 7 Kg of weight to it.

Of course, the key to good sounding audio equipment is not only the specs, all the chips and bits inside but more often it comes to simple things like how good is the power supply. A high quality toroidal based power supply could cost as much as 40% of the overall price of the end product it stays in. Often times manufacturers tend to use cheaper alternatives to lower the cost down, everyone does that sooner or later.

BP-600 will try to ameliorate part of that problem by using a high-quality toroidal isolation power transformer, this is not your typical power supply, it is something much more advanced than that.

Let’s dissect BP-600 step by step and understand why it matters and why should you care:

Here is picture inside of it in all its glory. I think it looks beautifully crafted and nicely put together. 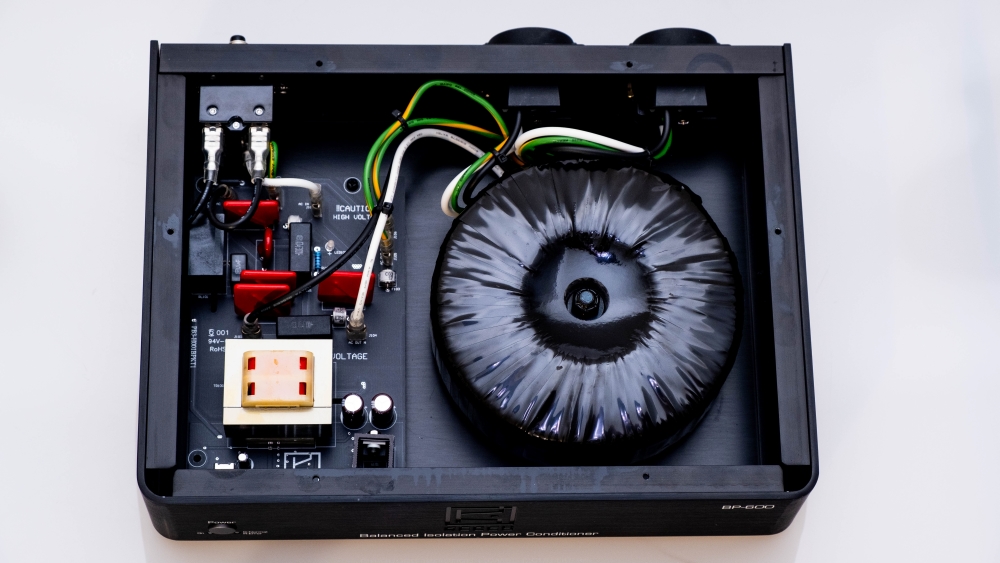 The KECES BP Series is having 3 different products: The BP-600, BP-1200 and BP-2400. The numbers are actually the maximum power they can supply, the BP-600 can supply a maximum of 600 VA and so on. I have the smallest one that should work as a wonder in headphone-based systems or even with low power active speaker systems. My KEF LS50W worked as a charm with BP-600 and they have dual-mono 230W amps inside, I think small bookshelf powered speakers will work no problem with it as well.

The unit looks quite simple, but its build quality is really top notch. The black anodized aluminum case has a thickness of 4 mm, with nice rubberized aluminum feet underneath it. On the front there is just one power button and two LEDs, the blue one means it is On, the green one informs you that it is working in normal conditions, if it changes color to red please press the reset button on the back.

On the back there is just one AC inlet and two AC Isolated outputs, I have the European Schucko version, the bigger BP-1200 has four outlets and BP-2400 has eight of them.

I like that it has a clean look with no visible screws on the front and side panels, there are only 6 screws on top, removing them and the top cover will reveal all its internals including the huge toroidal transformer. 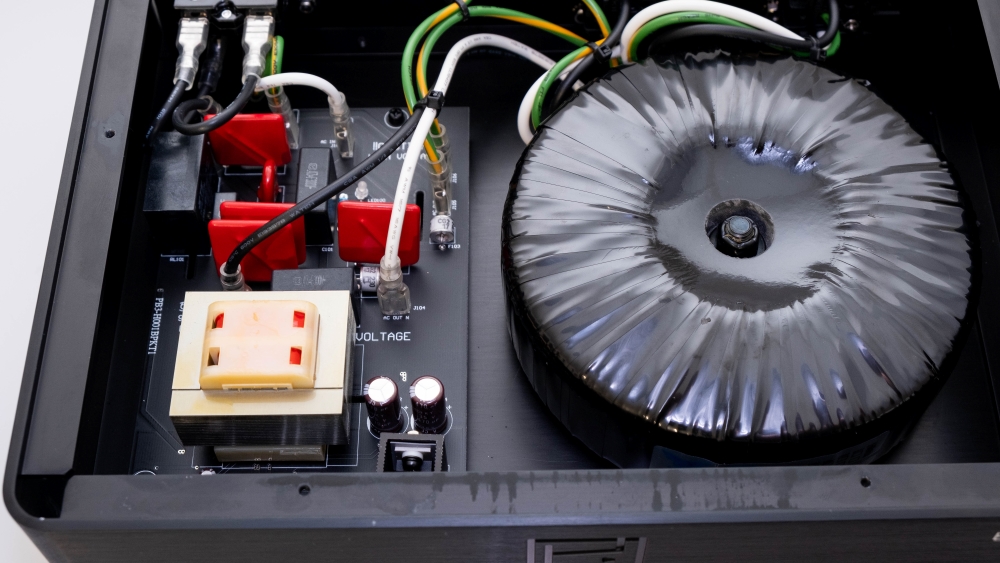 My 4-way DAC comparison was made using the BP-600 with two of those at a time, just to squeeze maximum out of those DACs. Later on, most of my listening time resumed to Matrix Element X attached to the Benchmark HPA4 headphone amplifier, driving a pair of Meze Empyrean or Quad ERA-1 headphones. The power cable that goes into BP-600 is a DIY cable made by me, using Ohno-Continuous-Cast (OCC) copper conductors of 7N purity with Mundorf Supreme silver solder on both ends. The other two cables that powers my equipment are Isotek EVO3 Premier.

I hesitated a bit to use it with my dual mono 230W powered speakers, but in the end, I connected my KEF LS50W and it worked as a charm. I just tried listening at maximum 50% volume, didn’t want to overload the BP-600.

OK everyone, I think it is time I take a longer listen with it in my acoustic chain. 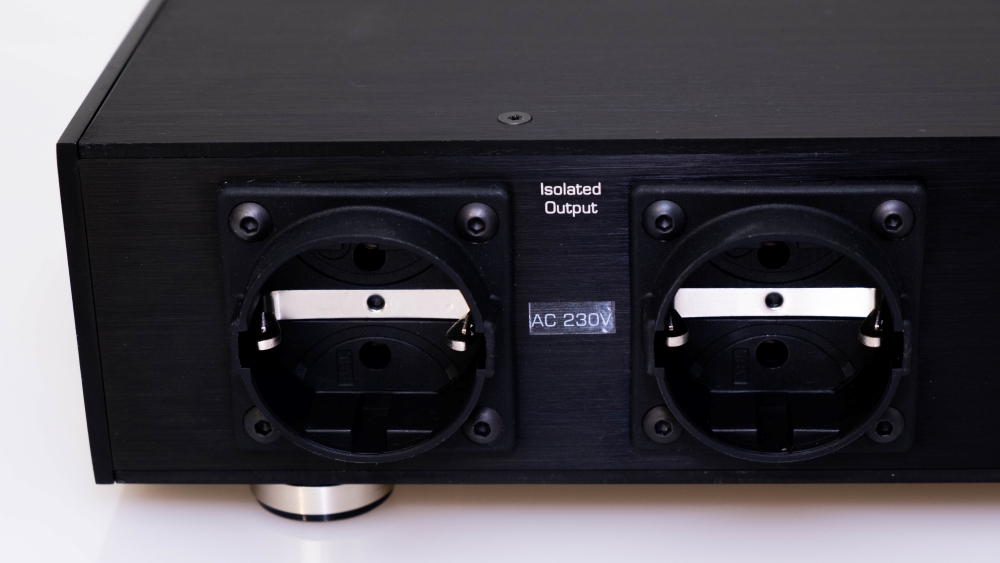 I just realized that both of those units are using lower quality switching power supplies that cannot block a lot of unwanted noise from the power lines. With BP-600 in the chain that problem is gone!

Just because the noise floor drops considerable the dynamic range rises higher and I can actually hear a little bit more nuance and micro-detail information. It is like my digital sources were upgraded to an upper class and I am hearing more of everything out of my favorite tunes.

At first, I told to myself I will just listen casually without focusing on nothing particularly. I pressed Play and immediately I started tapping my feet as I felt how the speed and impact improved considerably. It is like the music takes a shorter path before reaching its final destination, everything kicks me with more authority as slam is greatly improved.

Since the background noise is nowhere to be found, the air bubbles between the musical notes are much bigger so I am having a longer time appreciating all the notes individually. I don’t need to stress myself too much to hear all those hidden or low-intensity sounds, the air-mass moving is easier to pick up and feel inside your gut. 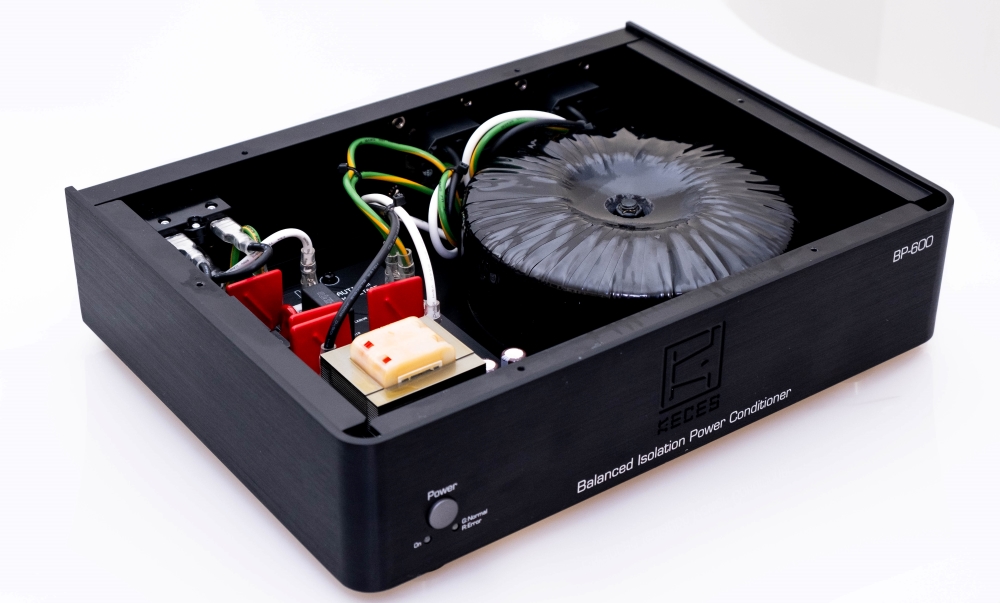 BP-600 gives a feeling that everything is sounding just right in terms of frequency area. It is almost magical at times because the shrillness I was having with few of my digital sources was ameliorated to normal levels of brightness. By far the biggest improvement was heard on the Mytek Brooklyn DAC+, it just transformed into something else.

The bass became deeper, it hit me harder, the midrange finally stepped into the light and the voices started having more body and weight. Actually, the biggest improvement was in the naturalness as the treble is not as hot anymore and the midrange started breathing easily. I now get it why people are using the Brooklyn DAC+ with higher performance power supplies and I am sure it can be further improved upon if the DC input is being used and not the AC input of that particular DAC.

Moving KECES BP-600 into my living room, powering the KEF LS50W (its internal DAC, streamer and dual-mono 230W amps) did a noticeable improvement as well.

Suddenly, my speakers sounded effortless and smooth. Since I have them, I never heard them as smooth and natural, I never thought a coaxial driver can sound so effortless and life-like. The difference was not as immediate as I needed to redo my tests with and without it in my setup several times. Room acoustics plays a big role and the speaker sound is not as immediate so the perceived difference was not as big. Nonetheless, KEF LS50W shown a blacker background, a deeper and better controlled bass level, a very nirvana inducing midrange and a clear as the sky and harsh-free treble response. I just felt my speaker drivers can’t do more than that on their own. For a better sound I will just need a better audio source.

There is another thing that sounded unusual to me: dynamics. There are times during the day, when I feel like my music is dead, nothing makes it sing and engage me. BP-600 brought back the dynamics I so crave about during the day. It is like the dynamic range of my equipment suddenly improved and I don’t need to raise the volume anymore to hear that punchy bass line or the double-drums with incredible kick and impact.

Every cause will have an effect and since BP-600 improved and cleaned the frequency area, as an effect it also removed the grain, harshness and boringness effect of leaner sounding sources. Every digital source I tried it with sounded snappier and as a whole more engaging than ever. 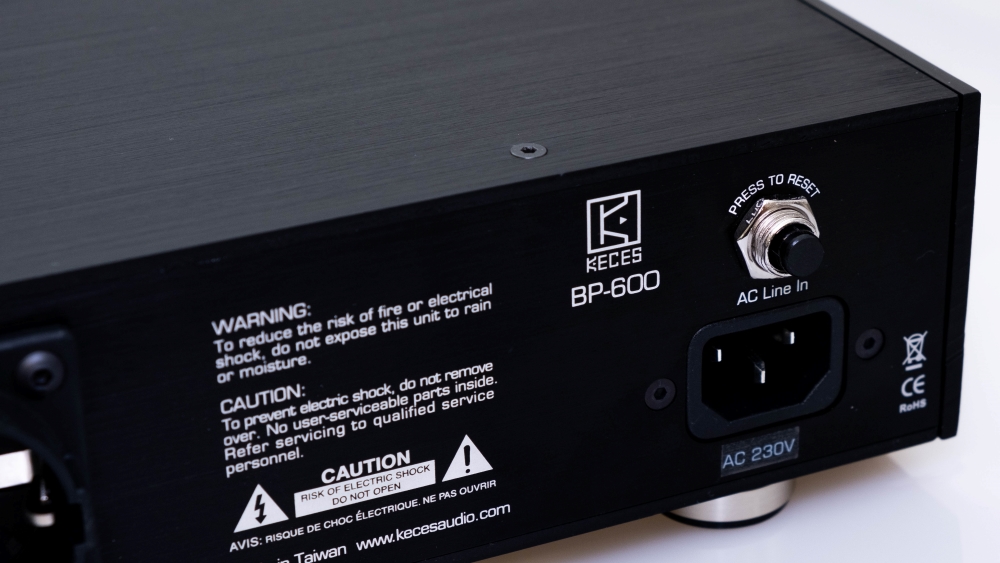 An active (transforms AC into DC and then back to AC) power conditioner might hurt the dynamics a bit, but a passive one as this KECES BP-600 will not do that as it has a much shorter path and overall less electronics inside. BP-600 in my setup changed the way I listen to music and I started to have a higher respect for such devices. Be warned though, some devices will see a higher improvement and other devices will see a much smaller improvement depending on the quality of their internal power supplies, but even with state-of-the-art equipment there will be a blacker background and a better flow of the music. KECES BP-600 shown to me that there is more nuance in the music, more air moving around, there is a better flow, hell, even the bass notes shown a higher layer count.

I consider it a must-have if you are really serious about protecting your investment and want to squeeze the last bit of sound quality out of your equipment.

KECES BP-600 can be purchased for 600 USD/EUR and for that amount it is just a no-brainer product, contact your local distributor for one. 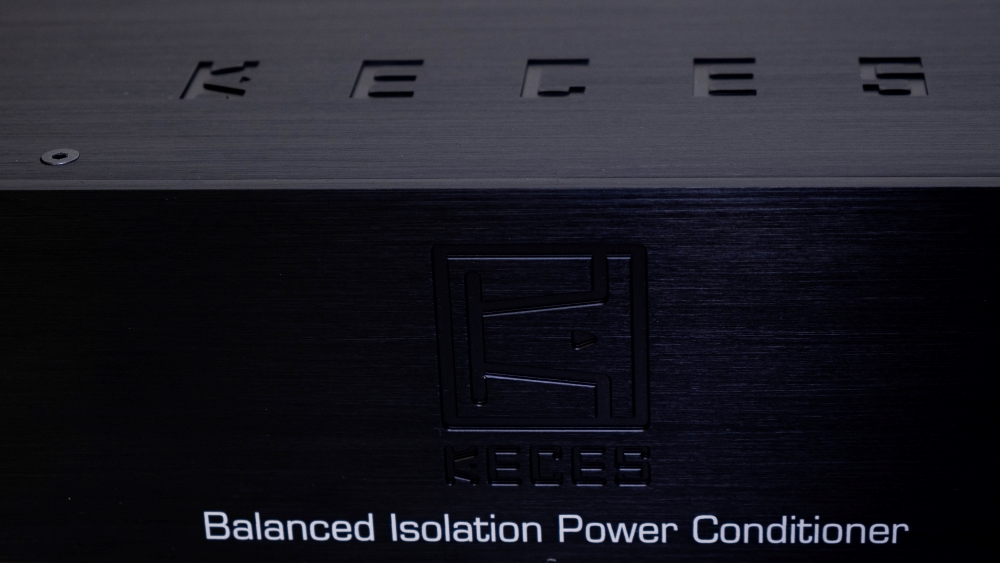 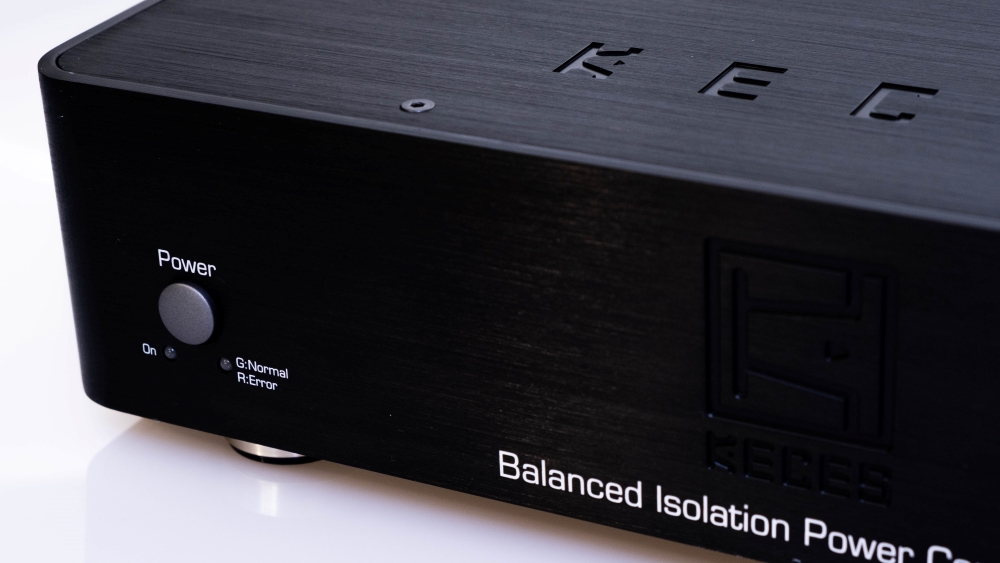