Whoever read my comparative tests with loudspeakers of up to 500 USD and up to 1000 USD, understood too well that good old Sandu hunts a pair of upper-class speakers.

At one point, however, this mission had become too tiring. I have taken home many times speakers from different manufacturers and at different price points but none of them really impressed me.

For example, Monitor Audio Gold 300 sounded uncontrolled on bass and treble sounded tiring on the long run, Audio Physic Tempo Plus sounded interesting and extremely natural and always something was missing: the sparkle on treble and the absolute control that I was still looking for.

From pure coincidence I went over some KEF Reference 3 and I sat down to listen to them for a few minutes and that was the moment I realized this is the sound I want: accuracy, speed and impact, sparkle on top, deep bass, very controlled and executed with great precision. The same feeling, I had after listening to KEF Blade 2 but everything became more imposing, more grandiose, the stage was infinitely wider and deeper.

After checking the price of these models, I dropped down to earth and decided to listen to the small and cute LS50 ones from the same manufacturer. The sound was very close to what was heard on Reference 3, except for the soundstage that was considerably smaller in size, the sound became less deep, the bass did not come down as low, but the impact, control and detail were absolutely in place.

I decided to borrow them and to make a more interesting review I also took a pair of LS50W (wireless) with me.

I’m not in the mood for technical specifications, which you can find anyway on the manufacturer’s website, but I want to mention that the UNI-Q driver is totally special. Firstly, it is exactly the same coaxial driver used in Reference 3, Reference 5 and in the beautiful Blade 2, speakers that are several times (ten times in the last case) more expensive than the tiny LS50 and LS50W.

Since the acoustic spectrum is reproduced by a single coaxial driver consisting of a 1” aluminum tweeter and a 5.1” aluminum and magnesium woofer, sound becomes very tight and fast, having a very accurate timing and transient response.

Often multi-way speakers have complicated crossovers and may have timing problems, drops on certain frequencies and often there can be an empty void between low and high frequencies.

Thanks to the LS50 and LS50W coaxial driver, they are totally devoid of these problems and their performance reminded me the sound of top of the line headphones, which also reproduce the acoustic spectrum using full-range transducers that don’t have any timing issues.

LS50W (wireless) are completely another animal to LS50 because they are internally powered by two dual-mono 230W power amplifiers, it includes a 24 bit / 192 kHz Hi-Res DAC and surprise: they also have integrated a very intelligent streamer.

The LS50W offers 4 digital connections: USB, Optical, Wi-Fi and Bluetooth (Apt-X). The manufacturer also provides an app that integrates Tidal, Spotify, Roon and DLNA streaming services and a precise acoustic tuning in case you want to integrate a subwoofer in your acoustic chain.

In short, LS50W consists of: LS50 speakers, a Hi-Res DAC, two 230W dual-mono amps and a smart streamer directly controlled by your smartphone.

How cool are these speakers? Über cool! LS50W are already winking at me and that’s bad news for my wallet.

Both speakers are looking very nice with a modern and minimalist look. The build quality is very high, fit and finish is incredible at this price point.

KEF LS50W were used as a solo all-in-one system and in combination with X-Sabre Pro to make a more objective and real comparison to the LS50.

Listening to the rhythmic music, I realized that the coaxial driver can do wonders, creating a sensible impact to the chest and eardrums. Besides the excellent timing, the speed and control of these speakers are quite impressive.
More than ever, I’ve been craving for Daft Punk so I played the Random Access Memories.

Musical performance was incredible with the exception of the bass that I would have liked to go lower and hit my chest harder.

Now we are talking! There is goes!

The speakers positioned in an open space of approx. ~ 33 sqm in which the first half of the room is the living room.

Placing the speakers closer to the wall (20-30 cm) gave me the most natural performance, emphasizing bass a little that was initially nowhere to be found.

The well-put together mix of voices, guitars, drums and digital sounds put my imagination to a great challenge. The musical notes were naturally placed in a three-dimensional field. For example, voices in most cases came from the wall or even from behind it, bells were heard coming from the upper right corner, the small hidden details seemed very obvious compared to other previously heard speakers.

Voices and string-based instruments had a natural texture and I was feeling the body of these notes. Overall the sound was full of substance and palpable. Voices have never been dry or flat. Violin and guitar plucks had a longer and a more pleasant vibration. The muddiness effect found on entry to mid-level loudspeakers has not been found at all. 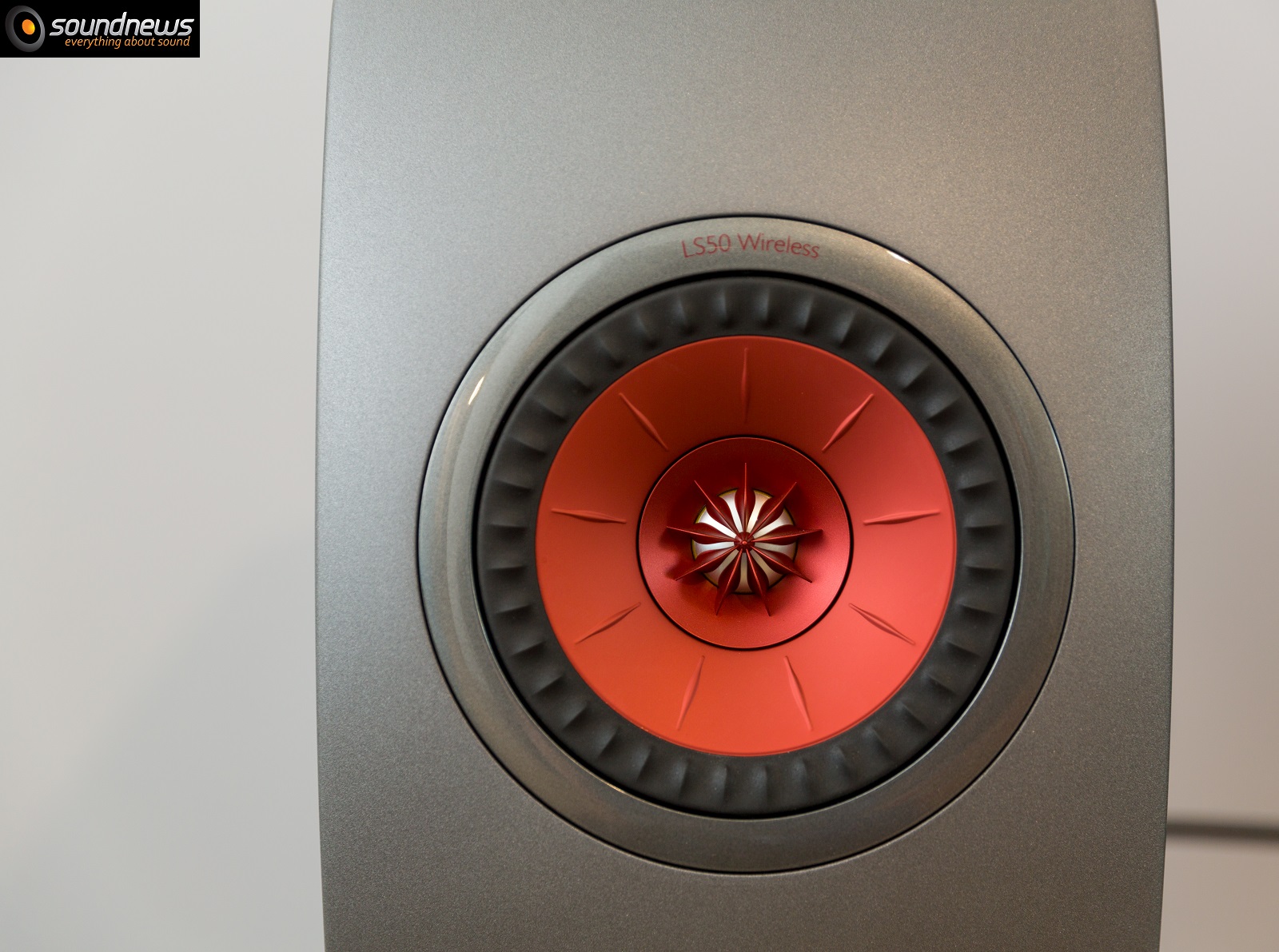 These speakers have a far above average precision and extraction of details, don’t want to give examples but they sounded better than the competition at the same price level.

The highs heard on Radiohead - OKNOTOK seemed to be very present and defined in a way, distinct and way different from what I’ve heard on silk or ribbon tweeters. They have a clear and well-defined sparkle but not abrasive and screechy at all.

Moving from mid-bass to midrange and later to treble region is so natural and smooth, I have not heard this effect on conventional multi-way speakers that have a more incoherent sound, where some notes will be heard first and others notes will come with a delay, there is no such thing on the LS50 and on LS50W.

Mid-bass is well tuned and sounds pretty clean, on some tracks multiple waves of mid-bass are hitting me that demonstrate the speaker’s ability to play bass on multiple layers.

The sub-bass seems attenuated but it is no wonder considering the size of the speakers and of the coaxial driver. If you do not use the KEF Music application, the speakers can go down to 45 Hz on the factory default setting, you can stress them in the app using the “more bass” option, which will lower the bass to 40Hz, but on this setting the bass will not be as clean and tight but a bit boomy.

I recommend the standard setting and approaching the speakers closer to the wall for deeper and more dynamic bass.

Even though the sub-bass is not deep, it always sounds clean and airy, if needed it can be helped by integrating an active subwoofer and this is exactly what I did at a later stage.

I friend of mine owns the SVS SB1000, I borrowed it on the idea of improving bass performance.

KEF Control app available for Android and iOS devices provides plenty of settings for easy integration of a subwoofer into the listening room.

Integration is easy … but tuning by ear is not. I did not have a microphone for calibration and frequency measurement so all the tuning was done by ear. It took me two days to find the best preferred settings.

After countless tests I realized that the speakers sounded best in full-range mode, and a high-pass filter will spoil the tonal balance, because beyond the bass it changes slightly the midrange performance, including voices. You should also play with that app, in the end you might come to the same result.

The low-pass filter has been set at 70 Hz, meaning the subwoofer will only handle frequencies up to 70 Hz, upwards from that will be handled by speakers. A higher number for the Low-pass filter, means subwoofer will have a larger impact on the sound, most of the time sound would become distorted and boomier, not to mention the room-induced resonances and distortions due to a higher SPL.

The volume of the subwoofer is set up to 40% and the volume in the app is at -9dB.
To make it clearer I am attaching two screenshots. 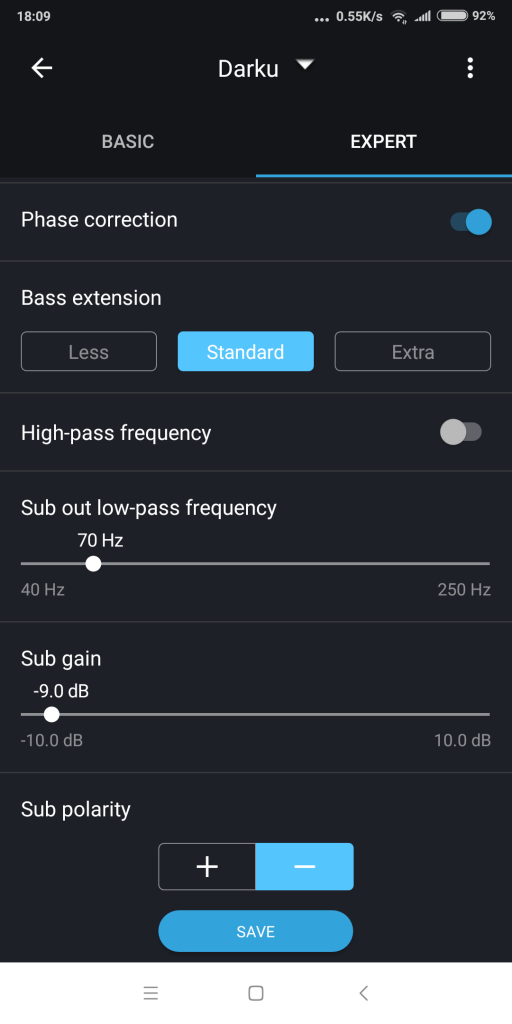 For me, these settings sounded the most accurate, so bass seemed just right and dynamic, having a pretty good attack without losing bass clarity.

Personally, I would always choose LS50W in detriment of LS50 even though they are twice as expensive and I will explain why.

Cambridge Audio Azur 851A is an above-average integrated amplifier, it is big and heavy and has a power reserve even for stand-floor speakers, it costs around 1500 USD and yet the biggest surprise was when I connected it to the LS50 and gave it a listen and that was the moment I realized it does not sound as good as LS50W alone.

For a fair comparison, LS50W were also connected to the Matrix X-Sabre Pro DAC, so both used the same source, amplification was the decisive factor between the two models.

The LS50W sounded more dynamic and livelier, even more explosive on some tracks, while the LS50 sounded slower and calmer with weaker dynamic rises.

The sound impact suffered the most, the difference was not huge but very noticeable in my case. In most cases, I listen to fast-paced music with fast dynamic rises and for this reason LS50W sounded more impressive.

If I take into account the Hi-Res DAC and the internal streamer of the LS50W then the LS50 are being KO from the start.

If you already have a very good integrated amplifier, maybe more suitable than the Azur 851A - not necessarily more expensive, but with a better synergy - then the discussion changes and the passive LS50 can be your winning ticket. 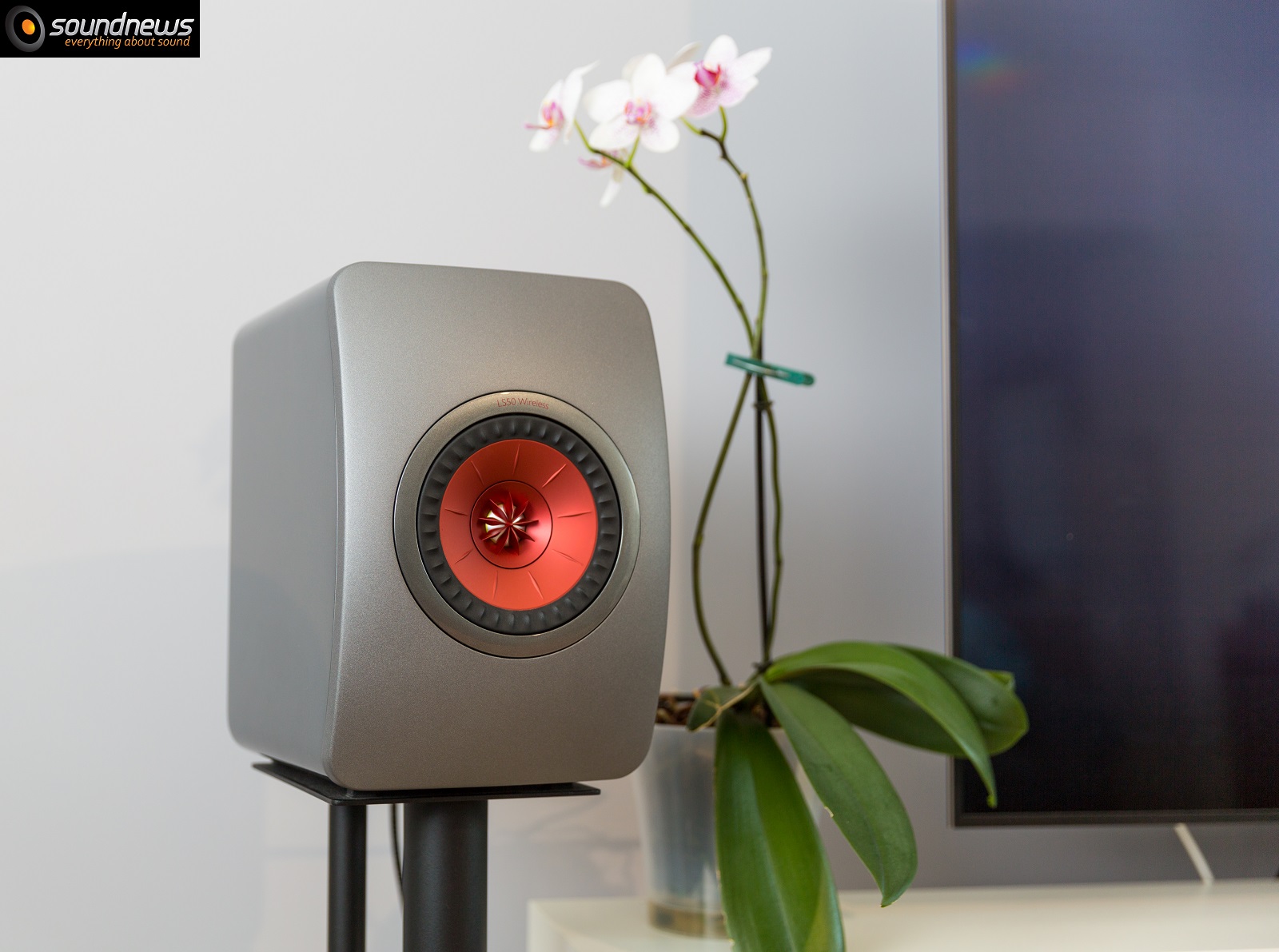 Overall, the LS50 but especially LS50W, have impressed me due to the All-In-One package and impressive sound. Both models have shown me again that there is a huge jump in sound quality over the speakers used in the previous tests.

It’s my first contact with a coaxial driver that sounds completely different from conventional multi-way speakers, the sound wall effect is very present on the LS50/W and the timing errors practically do not exist.

I’ve been trying for more than 6 months building a stereo system that’s made up of a DAC, integrated amplifier, and speakers, and nothing has ever sounded the way I wanted in the listening room, but the LS50W is approaching the benchmark I am looking for.

So I decided to settle down and remain with a pair of LS50W. 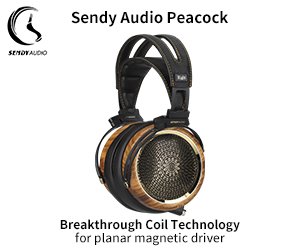